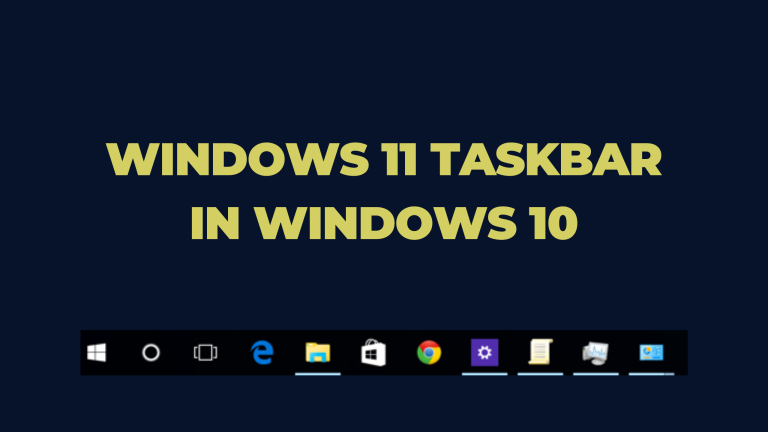 In this post, we will discuss how to get Windows 11 Taskbar in Windows 10. Windows is one of the most popular operating systems in the world, even with the emergence of competitors aplenty. The latest version, i.e. Windows 11, just came back in October. Users were a little divided initially, but the response to Windows 11 has been mostly positive.

What many users like about the new version is how sleek and clean everything looks. One major part of that look is the whole new revamped Taskbar. The new design has left people wondering if there is a way to get Windows 11 Taskbar in Windows 10.

Methods to Get Windows 11 Taskbar in Windows 10

The new Taskbar isn’t dramatically different from the previous one. The dimensions and the functions are pretty much the same. One of the biggest differences in the new Taskbar is its center alignment. All the contents of your new Taskbar are in the center instead of the usual left side.

Even the Start menu and the Windows icon are in the middle. The date, time, battery, connections, etc., are on their usual right side. This is the first time in the history of Windows that the alignment of the Taskbar is in the center. You do get an option to shift it back to the left side.

Microsoft has changed a few logos around as well. It includes the Start button, which now features a flat blue Windows logo. The Search box from Windows 10 has been removed and replaced with a button instead. There are a couple more logo changes, and some new animations are also introduced.

All of it is available on Windows 10, which explains why anyone would want to get the Windows 11 Taskbar in Windows 10.

There are two ways you can get the new Windows 11 Taskbar in Windows 10. The first method is to customize your existing Taskbar to resemble the one you get on Windows 11. It takes a little while, but you don’t need external software. The other, faster method is to install a third-party application that can change the looks of your Taskbar.

If you don’t want to install third-party software that you do not trust, this method is the one for you. You can make your Taskbar look exactly like what you would see on a Windows 11 system. However, it will be missing any new animations or features that are exclusive to Windows 11. You can customize various Taskbar elements to create a replica without losing any features you get on Windows 10.

The most noticeable visual feature of the new Windows Taskbar is all of its elements lying in the middle. There are two different ways you can bring that to your system without upgrading Windows.

One way you can do that is by using the “Links” feature of the Taskbar. Before getting into it, you need to unlock your Taskbar to allow customizations. To do so, right-click on it and uncheck the “Lock the Taskbar” option if you have it checked. Once you have it unlocked, you can find Links in the Toolbar menu.

When you click on it, a text saying Links will appear on the bar along with two little vertical lines. Using those lines, you can move Links to the left side, as we need to move the elements to the center from the left. You can then uncheck Show Title to hide the text that says Links to make it look cleaner.

There’s a lengthier but more accurate and organized substitute to it as well. It takes some extra steps but involves a lot less clutter. The first step involved in this method is creating two empty folders anywhere easily accessible on your drive.

Now, right-click on the Taskbar, go to Toolbars and click the option that says New Toolbar. Doing so will open up a File Explorer window, and you will be asked to pick a folder. Choose one of your newly-created empty folders and repeat the process once more.

Once you are done, you will see your folders on the right side of the bar. Click and drag one of the folders to the left side, which would move the bar elements to the center. You don’t want the names of the folders hanging around. Hide them by right-clicking the folders and unchecking the “Show Text” and “Show Title” options. You can also remove the vertices lines, aka dividers, by locking the Taskbar back. It will also save your changes and keep them from getting messed up.

Unfortunately, the position of the Start button can not be altered on Windows 10 in any way possible. You will have to compromise and keep it in its original place.

The Windows 10 Taskbar has a lot of elements that are absent from the new version. You’d want to remove all the excess content to get a more genuine feel of having the Windows 11 Taskbar in Windows 10.

One of the biggest exclusions in the new Taskbar is the wide search bar in Windows 10. Instead, there is a dedicated button that you can use if you want to search for something. You can opt for either having a Search button instead of a box or can remove it altogether.

Both options are present in the Search menu that you can access by right-clicking on the Taskbar. If you want to keep access to the Search function, you can choose the “Show Search Button”. Otherwise, you can hide it completely by checking the “Hidden” option.

Next up, it’s time to declutter the Taskbar by removing extra icons. Do so for both the bar and the System Tray.

You can also try decreasing the icon sizes to make it look more optimized.

4. Use A Third-Party Software

If you do not want to go through all the inconveniences of setting up everything manually, you can allow the software to do it for you. There are plenty of applications available for Windows that make Taskbar customization easier and broader. One of the best and most recommended applications is TaskBarX. The app is also completely free, so you don’t have to worry about fees or subscriptions.

You can find the application on GitHub or the official TaskBarX website. You can also download the latest version available on the Microsoft Store. However, the app available on the Store is not free. You will need to pay a small price, but you don’t have to. The free versions work just the same.

TaskBarX is available in a portable format which requires no installation. You can simply launch the application and change your Taskbar once you have downloaded it. What you do need to do first is extract the contents of the package. You receive a .zip file from the download, and you will need 7ZIP or WinRar to extract it.

Once you have extracted the application, you can launch it through the .exe file present in the extracted folder.

You don’t have to change much when you’re in the application. The default setting sets the bar’s alignment to center, so leave it unchanged. There are a lot of other settings you can play around with to get the best results. It includes transparency, corner radius, blur, gradient, etc.

You can also alter animations in case you want to.

Just aligning the bar to the center is only a part of the whole experience. If you want a more authentic feel, you can and should make more changes. You can state by downloading the official Windows 11 wallpapers to follow your new Taskbar style. Not everyone uses the default wallpapers, however. This is why you need to download a Windows 11 theme and icon pack. Your Taskbar will have a brand new Windows 11 touch from the Start button to the Battery icon.

Windows 11 does a lot of things right, and it got quite a few of them a little wrong. But if one of their goals was to make a visual improvement, they have inarguably succeeded at it. Microsoft brought quite a few changes to all of the visual aspects of their latest OS.

Some of the most noticeable such changes are in the Windows Taskbar. However, for their own reasons, many people are reluctant to jump to Windows 11. If you are one of those but still want the Windows 11 Taskbar in Windows 10, this guide is all you need.