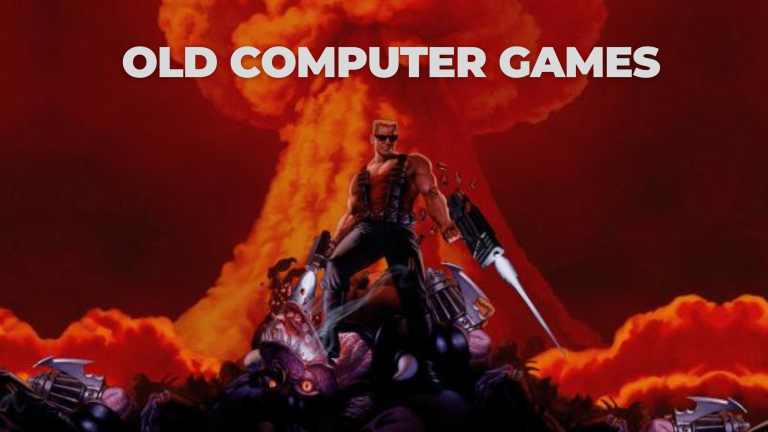 Let us dive into the world of nostalgia and talk about old computer games today. We have all heard the saying that goes, “Old is Gold”. It might not be true in every single context, but there’s nothing wrong with missing the good old days.

A little bit of nostalgia never hurt anyone, after all. Whether single-screen or split-screen games, it used to hit differently when you beat the final boss.

10 Old Computer Games That We Miss

Games from back then had a special feel to them. If you miss those games or want to explore the golden era of video gaming, there are plenty of old computer games to pick up today. Here are the best options to experience both nostalgia and quality gaming.

Resident Evil remakes and remasters have gained plenty of popularity over the past few years. It’s time to roll the years back and experience how the originals looked and played. The second installment of the original series is often considered an all-time classic.

Released in 2000 for Windows, Resident Evil 2 is one of the best old computer games you can play today, especially if you like action, shooting, and zombies. The graphics might not be impressive by today’s standards, but the gameplay matters more. And there’s plenty of fun to have while going around shooting the undead.

First-person shooters are among the most popular type of video games today. You may have played all the popular FPS like Far Cry, Call of Duty, Battlefield, etc. It’s about time you get introduced to the game that paved the way for all these titles.

We are talking about none other than Doom, which came back in 1993. Doom was the rage back then, loaded with 3D graphics and gameplay like never before. The game puts you in the space and asks you to go rampaging around. From alien creatures to demons from hell, there are a lot of things trying to get you, the Doomguy.

Doom has spawned numerous sequels and inspired a whole generation of video games. It’s one of those old games in computer gaming history that will forever be etched in the memories of whoever played or witnessed it.

While we are on the topic of first-person shooters, it only makes sense to mention Half-Life 2. The first Half-Life game came out in 1998, and the sequel took some time before coming out. But when it eventually did, Half-Life 2 took the gaming world by storm. The 2004 sci-fi FPS ended up winning 39 Game of the Year awards.

There was no competition for Half-Life 2 back then; even today, it stands the test of time. The graphics are still decent, and the gameplay and fine storytelling make up for an engaging experience.

If you are into an open world, only a few old computer games are as good as Morrowind. Morrowind is the third edition of the popular Bethesda game series The Elder Scrolls. Morrowind is set in a fantasy world populated with elves, titans, ghouls, and even demigods.

You create a character of your own and build your way up to saving Morrowing from the rule of a trio of gods and god-kings. The world is seamless, and there are endless side missions and goals. You will never find yourself bored while playing this game. If you want to play good open-world old games in computer, Morrowind should be on the top of your list.

This is one game that every teenager from the 90s might have played and adored. Vice City was one of the most popular offerings of the Grand Theft Auto series when it came out in 2002. The game has aged like fine wine. The recent GTA legacy remastered release debacle led to people turning back to the originals.

It might be the best time to check Vice City out if you have never played the game. The open-world game is full of action, violence, and aesthetics. Drive around the visually pleasing world of a fictional Vice City while completing hundreds of missions and side-hustle.

Here is a role-playing game for the lovers of a good old RPG. Chrono Trigger came out in 1995, and critics & fans consider it to be among the greatest games ever. It is one of the few 2D games featured on this list, but it makes up for it with its engaging story gameplay.

You will find yourself on a fictional planet and go through its different ages and eras. Going from a prehistoric age to a post-apocalyptic dystopia, Chrono Trigger is an exciting and engaging journey. You fight humanoids, monsters, aliens, robots, etc. Even time travel is involved. If you can compromise on graphics, Chrono Trigger is one of the best old computer games out there.

Another Bethesda video game makes a list, and rightfully so. Everyone knows the likes of Skyrim and Fallout 4, but you are missing out on what started it all for Bethesda. Fall Out was one of the biggest hits for Bethesda and established a loyal fanbase for ages to come. If you like RPGs, Fallout is one of the best old computer games there are to play.

Get into a post-apocalyptic world suffering from a nuclear war. Explore the wastelands, find survivors, battle enemies, etc., all while customizing and upgrading your character.

Duke Nukem 3D is another one of those games that popularized the whole first-person shooting concept. The gameplay is a little similar to the previously mentioned Doom, but the story and the progress are highly engaging.

The basic story is to fight against a hostile alien invasion of Earth. The game is rich in locations, weapons, and mechanisms, making it extremely enjoyable.

Silent Hill 2 is among the most influential video games ever when it comes to horror. If we are talking about old computer games, it would be criminal not to include it. The eerie environment and gripping story of Silent Hill 2 scared and overwhelmed a whole generation of gamers.

It has reserved its place on the list of iconic old games in computer gaming history that extends beyond just horror. Survive the horrifying and man-devouring city of Silent Hill if you can while trying to find people you once called family.

A video-gaming list should always include a strategy game for those who love challenges and puzzles. Dungeon Keeper is all about planning and strategizing. The goal is simple; construct a dungeon and keep it running. The challenge is to do so while battling invaders and making everyone around you co-exist.

Dungeon Keeper draws you in, and hours go by without knowing once you are invested. You don’t need the internet or a high-end GPU to play this game.

In all honesty, some video games will never age. These classics have their names immortalized forever, thanks to the impact they had. It’s impressive how people are still playing “outdated” games with “poor” graphics from 3 decades ago.

If you want to experience what it was like for gamers back then, you should try these old games on your computer. They are low-specs demanding, and you don’t need a high-end PC to run any of them. Critics love these games then, and people still adore them.