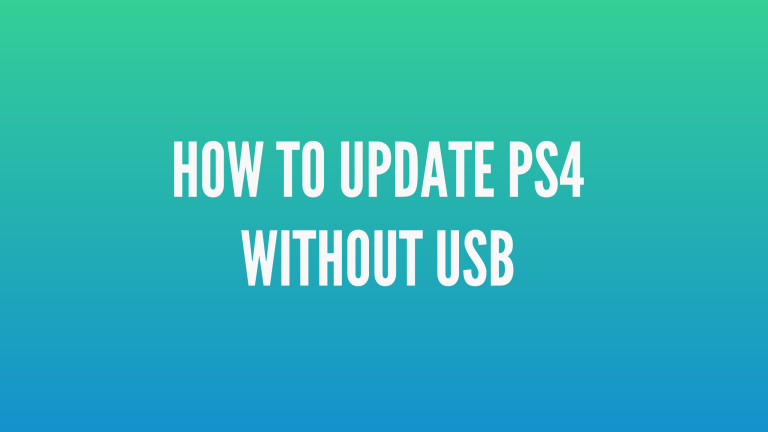 Owning a PS4 is the dream of many gamers around the globe. If one wants to have the best kind of gaming experience, it is important to tap into the next generation of technology. PS4 has to be one of those tools that transform your gaming experience to another level. In this post, we will discuss how to update PS4 without USB.

It’s the most refined gaming console that Sony has ever built. So if you have owned PlayStation before and loved to use it, PS4 is the console that’s going to exceed all your expectations with a plethora of advanced features. However, you shouldn’t be settled by just buying a PS4 console.

Since it’s the next generation of technology involved here, regular updates are a must. New things are coming up on PS4 now and then for all its users. If one doesn’t update his PS4, he’s bound to stay away from all such features. Let’s have a look into the advantages of updating PS4:-

When you have got such a technologically advanced tool, you better use it right. But there are times when you are not able to update PS4 with the help of a USB. Some challenges are coming with it so you have to settle for the update without the assistance of a USB.

How to Update PS4 without USB

Some people ask if it is possible to update PS4 Without a USB. Newsflash, it is possible. You just have to follow the steps that we have mentioned below:-

First things first, you have to turn off your PS4. If you use a USB to update the system, it wouldn’t be the same case. But as you may expect, the challenges are stiffer in regards to PS4. There’s no rocket science involved in this step. All you need to do is turn off the system and head towards the next step. It is barely going to take you a few seconds to do so.

2. Put Your PS4 Into Safe Mode

Unless you put your console to safe mode, you wouldn’t be able to get things done without a USB. Since you have already turned off the device, you have to press and hold the power button. Some people make the common mistake of releasing the finger with just one beep. You shouldn’t be making the same mistake. It would require two beeps before your PS4 is put into safe mode. While switching off the device is going to take a couple of seconds, putting our PS4 into safe mode is going to take roughly 7 seconds. Boom, your PS4 will start in safe mode.

You will have to take the help of a USB cable but to connect the PS4 Controller to the system. Now, this step is considered to be ineffective by a lot of people as the USB cable doesn’t connect with the PS4 Controller in the first place. There are a few things to be made sure of regarding the cable. It has to support data as well as charging. If your USB cable doesn’t support data and charging, you have to buy a new one. There are no alternatives here since updating PS4 without using a USB is any way your last resort.

Once you have plugged in the USB cable and your PS4 Controller starts functioning, you have to enter the safe mode menu. There are going to be all sorts of options available in front of you. You will see the option “update system software” somewhere on the list.

You just have to click on the “update system software” option to finally get the job done. Generally, it is going to take you half an hour to update your system. It can take longer at times but it shouldn’t take any more than an hour.

So, this was the tutorial on how to update PS4 without USB. Get in touch with the most advanced bunch of features on offer from your system. It is going to enhance your gaming experience for sure. If you love to watch videos or movies on your PS4, you will see a significant amount of difference after the update.