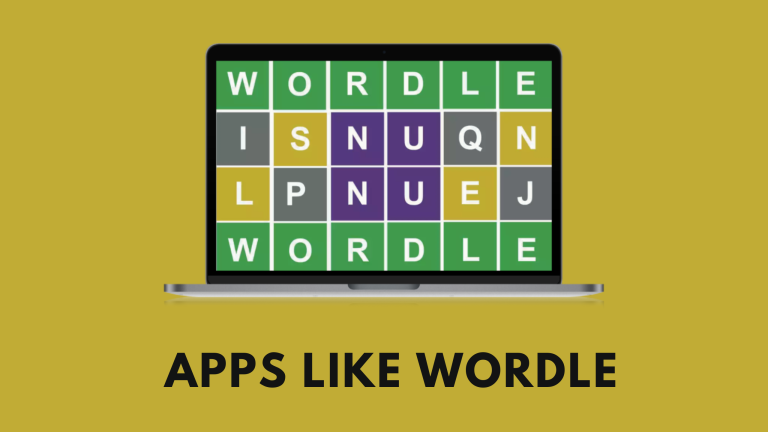 In this post, we will have a look at some great apps like Wordle. Everyone and their mothers know about Wordle at this point. The web-based word game went viral earlier this year and remains a rage still.

For those who might not be familiar with it, Wordle is a word game inspired by Mastermind, a color-matching back. Wordle and GeoGuessr were two such games that were being played in almost every household.

In Wordle, you have to guess a mystery word every day. The word is common for everyone playing across the globe. It’s based on guesses and guesses only. You guess a word, and the game tells you which letters are placed right, wrong, or completely wrong.

Wordle achieved global fame and inspired countless similar games with varying themes. There are plenty of apps like Wordle to play on your phone as well. You can play these anytime, anywhere, without going to any website. Here are some of the alternatives:

If you want to feel that genuine Wordle experience, there are only a few apps like Lingo that you can find on mobile devices. It is based on a popular TV show of the same name that aired in multiple regions and languages for decades.

The theme is the same as Wordle. You get a new word to guess every day. The format and everything are identical to how you would usually play Wordle on a website. The game is pretty challenging and fun. You can find Lingo on both Android and iOS devices.

Wordle is all about guessing words, and Guess The Words offers the best, as the name suggests. It is one of the best Wordle like apps that you can download on your mobile phone. The premise is the same as Wordle, but the execution is quite different.

Instead of making blind guesses, you are to take the help of a picture provided. It might sound easier in theory, but that’s not the case at all. Things get more and more challenging at every step, and plenty of brainstorming exists.

Guess The Word has been downloaded over a million times on just the Google Play Store. It also has an impressive rating of 4.8 stars.

Up next on our list we have Worde developed by Potudo. The concept, the format, everything is identical to what you might have experienced on Wordle. You get a different word to guess every day.

Start by guessing a random word as you gather clues on the different letters. You get 6 chances, just like in Wordle. Wait for 24 hours for a new word to appear. The app is only available on the Google Play Store for Android devices. It has been downloaded over 100K times as of today and has a 4.5-star rating. The rating is based on nearly 8K reviews, so that you can count on it.

One of the most fun and best apps like Wordle out there, Wordsmyth is an elite word game you’d love. The game gives you a new word puzzle every day to solve. The best part of the game is not the core gameplay but the whole presentation. Wordsmyth is designed to be calming and focused.

There are no ads or distractions to kill your immersion. A lot of apps and games ask you to either pay up or bear with countless ads. That’s not the case here, thankfully. You can focus on solving the puzzles with the most calming and aesthetical backgrounds.

There are plenty of word-guessing games out there for mobile phones, but not all of them are quite worthy of your storage or time. Different apps have their own issues ranging from ads and paywalls to bugs that make them unplayable.

Wordie is, fortunately, completely free from anything like this. What’s even better is its fun and visual take on the classic word-guessing. The game gives you 4 different images and clips. All of them have something in common, and that’s what you need to guess. Millions of people have downloaded the games, and you should too.

Next on the list, we have Letterpress. It is a multiplayer word-based game available for both Android and Apple. The app used to be an Apple exclusive for a long time, but that’s not the case anymore. It is a 2-player game that you can play both online and offline. If you don’t have a person to play with, you can test yourself against the game’s AI.

The gameplay is simple. You receive a board full of letters and take turns forming words with them. You get points based on the length and complexity of a word. Whoever gets the most points wins.

Word Forward is one of the most fun and challenging word-puzzle apps you will find on the phone. It’s almost like a game of word-based chess. If you are looking for fun apps like Wordle that can actually challenge your intellect, this is the way forward.

The app gives you a random board of letters. You have to swap them around to create words. The strategy factor comes in when you have to decide whether to play safe with smaller words or take a risk. Word Forward is available for both Android and Apple devices.

If you love cats and puzzles and want to improve your vocabulary, Kitty Letter is your thing. It’s not one of the identical apps like Wordle where you have to make random guesses. It is one of the few similar apps where you can invest in an actual story mode. The gameplay goes deep, and it is better to try it out yourself through a tutorial.

The visuals and mechanisms of the gameplay are both top-notch. There are a lot of unprecedented elements that you wouldn’t expect in a word game for mobile.

Typeshift is a free mobile app that you can download if you are getting bored waiting for your new Wordle word of the day. You are given a bunch of rows of letters which you have to adjust to form a word in their middle. It might not be among those exact copycat apps like Wordle, but the uniqueness sets it apart from the rest.

This app looks and feels a little similar to our previous entry TypeShift. The same creators have developed both; however, the gameplay is quite different. SpellTower is more like a words version of Tetris for mobiles.

There are 6 different game modes to try. The modes are Tower, Daily Tower, Puzzle, Extreme Puzzle, Zen, and Rush. Each mode has its different perks and goals. But you wouldn’t have a dull moment playing this game ever. It is one of the best Wordle like apps.

Word games and puzzles are a fun way of keeping your mind sharp and running. Studies have proven it as well. The likes of crosswords and so-do-Ku have been around for ages now. We have also been introduced to more innovative brain-busting games and applications over the year.

Wordle is a fine example of that. Wordle lets you do some mind exercises while you are sitting idly on your couch. Some similar apps like Wordle bring you the same experience without having to go to a website. Have fun and let these apps work your brains out.